Celine Noiret and her man are hangin’ out at the bar, and they’ve spotted something that they have to have – namely, the lovely Efrona, who’s sitting at the bar next to them. However, she’s playing the bookworm, “hard to get” type, so Celine and her man decide that some shots are needed in order to loosen up the atmosphere a bit. Efrona resists at first, but deep inside she’s down for a good time, and after glugging some of that liquid courage down she finds herself on her knees and getting some help from Celine in sucking her man’s cock. Efrona starts out slowly, but soon enough she’s in the mood for fucking, and very quickly she learns that if she wants to party with this crew she has to be down for some of that golden shower piss loving as well! Once all systems are good to go the bar becomes the background for one hell of a fully clothed pissing scene, and staff is definitely going to have to come out at some point and mop up the insane piss mess they make all over the place! 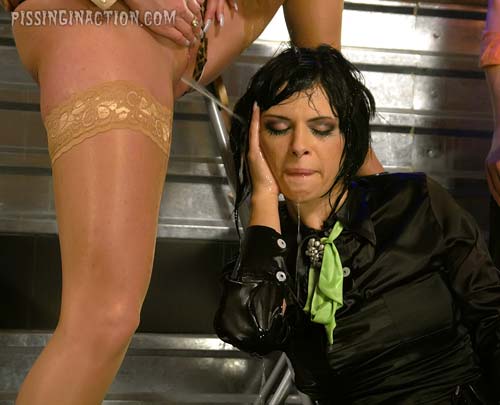